Today the House of Representatives of a state that has horrific employment and other economic issues used its time (and, by definition, taxpayer-funded resources) to pass a resolution designed to let the state’s voters prohibit gay marriage.

Also in that state today… 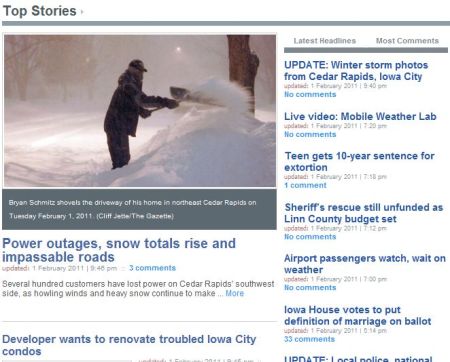 Rev. Pat Robertson sparked controversy in today’s broadcast of his 700 Club program when he claimed that God created the blizzard currently battering the Northeast “to punish Americans who were planning to drive to do something gay.”

That passage was satire (from Andy Borowitz.)

I bet that you couldn’t tell.

But, if Pat Robertson was intellectually honest (I know – I should have warned you before I did that; now, clean your screens from the spew and read on), wouldn’t he say that god was punishing Iowa for what the deceitful (they got elected by saying that the economy was THE issue) House Republican leadership did to gays and lesbians?

This entry was posted on Tuesday, February 1st, 2011 at 8:10 pm and is filed under Random nutty fundies. You can follow any responses to this entry through the RSS 2.0 feed. You can leave a response, or trackback from your own site.