While I’m at it regarding posting old photos, here is one that I believe has heretofore never seen the light of day.  After shooting the roll back in 1998 I never did anything with it other than to make a contact sheet.

However, now – with a functioning negative scanner and with the tenth anniversary of his death having passed by a week or so ago, I give you… 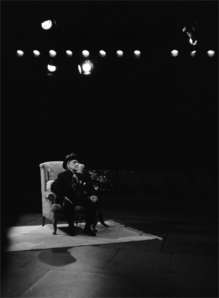 I have to admit that I feel a bit odd lauding the guy in any way.  Yes, he was a long-standing personage in LGBT circles but there’s no way around the fact that some of the stuff he said that night was downright racist (one particular remark about Princess Diana and “Arabs” sticks out.)

Having said that, I do still enjoy his performance in Orlando.

The war is anticipatory – anticipatory of the truth being revealed as to why ENDA is about to be slow-walked into oblivion. 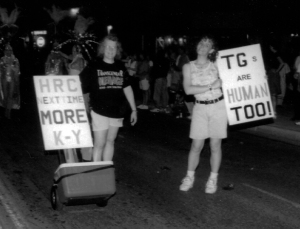 and don’t forget who is who – and what is what.

One More Reason to Hate the Cheney Family

And, of course, it involves Mary ‘What’s wrong with me getting all of the equality I need via the womb from which I emerged? I can’t be bothered with queers who couldn’t choose better political parentage’ Cheney:

Morning Joe’s guest had written a book about the Secret Service and just dropped the bomb that Mary Cheney got the leader of her Secret Service detail replaced (fired) because he wouldn’t organize her detail as a taxi service for her and her friends.

My only real issue with Suzan’s take is referring to the A Room of our Own bit as “diarrhea.”

That clearly constitutes an unnecessary insult to diarrhea.

Here is one bit of historical background that Suzan offers – specifically regarding the Daly-Raymond axis:

Their Catholicism is the source of their ideology not feminism.  I may blend anarchism and Marxist class consciousness with my feminism but they had to do an even bigger trick, that is to say they had to build their feminism on a foundation of misogyny.

[L]ook, not everyone’s doing poorly. In fact, the Masters of the Universe are back to their old free-spending ways, thanks to the massive government bailout funded by our tax dollars:

Conspicuous consumption is making a comeback on Wall Street. But no one wants to admit they’re doing it.As traders and investment bankers near the finish line of what looks like a boom year for pay, some are spending money like the financial crisis never happened. From $15,000-a-week Caribbean getaways to art auctions to $200,000 platinum wristwatches that automatically adjust for leap years, signs of the good life are returning.

“What we’re seeing in the last four to eight weeks is a fairly substantial uptick” in demand for extravagant purchases as Wall Street employees grow more confident that the market’s steep rebound so far in 2009 will soon bring them fat bonuses, says David Arnold, senior vice president at Robb Report, a magazine targeted at the super-wealthy.

Does the name Marie Antionette ring a bell?

If not, I’d look into it.  That $200K wristwatch isn’t the only clock that’s running.

Vanessa Edwards Foster has posted video of her keynote at the Chicago Day of Remembrance event.  Here are the links; embedding didn’t work:

Rex Wockner on the House slow-down on ENDA:

Asked for comment on the delays and rewriting, HRC spokesman Trevor Thomas e-mailed the Advocate story and some links on HRC’s Web site that are older than the Advocate story. When asked for more information, Thomas accused this reporter of being out of touch with HRC’s ENDA-related efforts.

He later wrote: “After speaking with our legislative team I can tell you that the entire coalition is working closely with the (congressional) committee. It is our understanding that the legal issues the committee wants to address before markup will continue to keep ENDA on a parallel track with Title VII.”

A high-placed, longtime source alleged that the House “committee staff aren’t talking to HRC at all and HRC is in the dark about what’s going on.” Thomas said that is false “and I’ve reconfirmed we are talking with committee staff.”

Yes, there’s some not-so-funny business going on in Congress regarding ENDA, but that song-and-St. Vitus-dance by the Scampaign-oid only re-begs a long-standing question: Why does HRC even still exist?  That nonspeak is less substantive than the ‘statement’ issued by Tiger Woods about his ‘accident.’

And forget the gay-trans divide, an even bigger begged question is: What has that organization ever done for anyone who doesn’t collect a paycheck from it?

And you know the NFL…

the football league that plays most of its games on…

8 Remember the Sabbath day and keep it holy.

9 For six days you shall labour and do all your work.

10 But the seventh day is a Sabbath to the Lord your God; you shall not do any work—you, your son or your daughter, your male or female slave, your livestock, or the alien resident in your towns.

11 For in six days the Lord made heaven and earth, the sea, and all that is in them, but rested the seventh day; therefore the Lord blessed the Sabbath day and consecrated it.

Okay – that’s not so much of a question per se as it is something that someone whose family makes a living off of recruiting people into christianity should see as mandating some sort of career that will not mandate that he work on Sunday.

And I’ll admit: I’m being a bit unfair to Tebow.  He’s simply the (technically-future) highest profile  person who, if said person actually has a belief in the inerrancy of the text of a certain book, should be willing to yield to that ‘inerrancy’ and forego however much money said person could make by working on Sunday.

What do you think will occur sooner: a professional football player speaking out against some aspect of LGB(T) rights as being contrary to the ‘word of god’…

or a college football player with both a professed belief in fundamentalist christianity and a guaranteed ticket to a pro football career foregoing the latter because it clearly conflicts with the former?

What ‘Its All About the Children’ Really Means

From Crooks and Liars:

Pedophile Priests Protected Not Only By Church But Also By Police

Any other organization that did this to children would be branded as a terrorist organization and treated as such by all legitimate governments throughout the world.

Is Joe the Rat’s Pack special?

Or are the governments that have given it special protection not legitimate?

Texas Sen. Kay Bailey Hutchison thinks Texas Gov. Rick ‘I have no problem with executing an innocent man and then blocking an investigation that would conclusively prove the man’s innocence’ Perry is a liberal.

As an example, the Dallas Republican, who is challenging Perry in the 2010 GOP primary, cited the governor’s attempt to mandate a cervical cancer vaccine for Texas school girls.

“I’m the conservative,” Hutchison said on the WFAA-TV program “Inside Texas Politics.”

Maybe its not the Republican disease; maybe its just Kay going senile.   After all, maybe she mistook Perry for Rod Blagojevich because of the similarity in hair.