Coming on the heals of the hereditary Darwin Award-winning snakristianist taking a dirt nap, we have the story of some christianists who didn’t want to let any icky, legitimate physicians stop their child from taking a dirt nap:

A Washington state couple has agreed to accept a plea deal that spares them jail time but holds them responsible for their teenage son’s death after they failed to call a doctor.

A jury acquitted JaLea and Greg Swezey of Carlton of second-degree murder charges for failing to call a doctor or ambulance before their son Zachery died of a ruptured appendix in 2009. However, they still faced manslaughter charges.

The Swezeys are members of the Church of the First Born, which believes in faith healing.

And they’re star citizens of the Circling-the-Drain States of America – who lets murderers like this go free but imprisons trans women for defending themselves (shout out to Om!; apparently CeCe McDonald made the mistake of not claiming ‘religious freedom,’ eh?)

The item about the oppressive child-murderering christianists who – for all practical purposes – got off scot free by claiming that paying for the crime that they committed would mean that they were being oppressed came from one of the wonderful sub-Fox ‘News’ christianist propaganda sources: One News Not.

Note, however, how the page appeared: 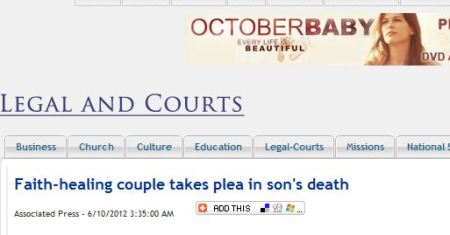 It is beneath a banner ad for a movie entitled ‘October Baby.’

Well, on a christianist propaganda site, you can probably guess what such a movie would be about, but lets take a look at the info for the film:

The listing of the ‘stars’ (featuring such luminaries as, um…, John Schneider and Jasmine Guy) is hard to read on that, but at least a few of the organizational logos promoting the ‘film’ should stand out – well-known terroristic hate groups such as the ‘American’ ‘Family’ Association (AFA), the ‘Concerned’ ‘Women’ ‘for America’ (CWFA) and Fraud on the Family.

Now, the money shot – the IMDB synopsis of the ‘film’:

A college freshman’s world is rocked when she learns she is the adopted survivor of an attempted abortion.

Yes, with right-wing tool – who would have had no career but for a television series (30 years ago, but why quibble; and the less said about his singing career the better) which glamorized all manner of illegal activity (so long as it is done by white, ostensibly-christian country-folk) – John Schneider as its biggest name (Victoria Jackson, Kirk Cameron and Stephen Baldwin weren’t available? I’m shocked!), you know its a high-quality production…

and, of course, a propaganda film opposing abortion…

something which christianists claim to consider to be murder (until one of them – or one of their daughters needs one – but why quibble?)…

yet, here, being opposed by a film being promoted on a webpage that not only facially claims to be ‘news’ but also uncritically accepts the notion of America’s legal system giving special rights for people who kill actual, non-fetal children by witholding legitimate medical treatment from them.

Mitt Romney Really Will Lie About Anything

From The World, According to Me:

One of they key tenets of the LDS Church is that in 1820, God appeared to Joseph Smith.  In fact, what differentiates Mormonism form other religions is the fact that we believe that God has spoken to, and through prophets from Joseph Smith and Brigham Young to Gordon B Hinckley and Thomas S Monson.

So why, in 2007, did Mitt Romney tell a Boston TV station in 2007 that he didn’t think God had spoken to anyone since Moses?

Because, like all white, christianist (and christian-esque) conservative elites, Mitt Romney does not believe that rules apply to him – so he is free to lie about anything and everything.

Dick Smothers: What could President Johnson do to encourage people to stay in the U.S.?
Tom Smothers: He could quit.

The John on the Rhode Island Avenue Cesspool (and the effect – if any – that Joe Solmonese regenerating into Chad Griffin will have):

I’m at the age where I’m just not sure they can be any better than they are.

Zero is greater than a negative number. 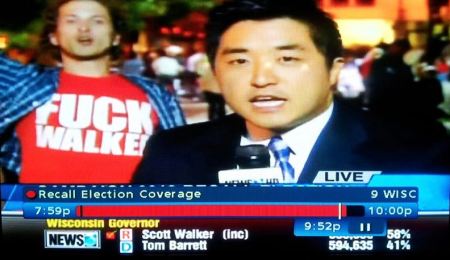 Able to destroy tall buildings by killing all of the American companies therein with a single hedgefund transaction….

(The top portion of) today’s front page of the website of the Houston Chronicle, the corporatist slagheap of anti-news in the fourth largest city in the country:

Now, to be fair, the comicapalooza image rotates with the others underneath it – so, it is possible that someone could go to chron.com and find that the top story is the presidential-year – and, of course, U.S. House and Senate (tea-party-bot Ted Cruz, anyone?  Status-quo-Republican-oid David Dewhurst, anyone?) – primary being held today.

But with the state’s primary being held today – and the ongoing efforts by corporast christianists to buy the presidency via a combination of lying about Mitt the Flip’s record of ‘job creation and bullying people into not questioning those lies – why would an organ of actual ‘journalism’ have a front page filled with stories focusing on (by my count) nine celebrities (more if you count the reference to the ‘Talent’ crapapalooza; still more if you count ‘Wonder Woman’; perhaps even more than that depending on how many people are in the group Sugarland.)

Sure, some of the items are actual news – but do any of those deserve to be of lower significance than a comic book convention (and, bear in mind that I went to plenty of them in Houston when I was a kid – a couple of those even featuring George Takei as a guest)?  And is some clown’s effort to make a “practical iPad nightstand’ even news?  Or just a commercial?

More Americans died in Afghanistan today because George W. Bush was too connected to the Bin Laden family to go after Osama in 2001.  More Americans committed suicide today because of the mental abuse inflicted on them by two wars that Republicans lied us into.  More working-class Americans were conned by corporate media into believing that millionaire-who-has-never-worked-a-day-in-his-life-son-of-a-millionaire Mitt Romney actually gives a shit about whether they live or die.

Vulture capitalism poisons everything it touches.

It’s no secret in my part of the world that Cory Booker is a very ambitious man, whose horizons stretch far beyond New Jersey. (Until the election of Barack Obama, many observers thought he would be the first black president.)

This might explain his fondness for Bain Capital – their employees were among his earliest financial backers:

A ThinkProgress examination of New Jersey campaign finance records for Booker’s first run for Mayor — back in 2002 — suggests a possible reason for his unease with attacks on Bain Capital and venture capital. They were among his earliest and most generous backers.

Job Killers of a Feather Destroy America’s Working Class Together

You’d figure that if Mitt the Crip (Blood?) is even remotely as close to being as intelligent as he wants Snookified America to believe, he’d stay the hell away from someone who publicly gushed over the California of thirty years prior whilst apparently thinking that no one would notice that the person she was running against for the California governorship in 2010 was California’s governor thirty years earlier.

Mitt Romney, despite the massive job losses Bain Capital caused when he was running it, calls himself a job creator. But that title is hard to believe, especially since Romney is gushing about Hewlet-Packard CEO and former California gubernatorial candidate Meg Whitman on the same day it is discovered that her company is killing American jobs.

In an interview with the National Review published on Thursday, Mitt Romney said he wished Whitman were the Governor of California instead of Jerry Brown, whom Romney insisted was doing things wrong. Romney praised Whitman as an economic guru, telling the Review,

“I wish Californians had elected Meg Whitman. She would have been more successful and explained to Californians the need to cut back on spending and eliminate unnecessary programs.”

Romney’s praise for Whitman couldn’t have come at more inopportune time, as The New York Times reported  on the same day that Whitman intends to eliminate 30,000 American jobs mostly through layoffs and forcing workers into early retirement. Even though Hewlett-Packard made a staggering $7.1 billion profit in 2011, Whitman is cutting these jobs in America while leaving Hewlett-Packard jobs intact in China and elsewhere.